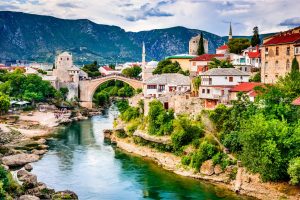 The name of the city signifies “bridge-keeper”, as a bridge has always been at the heart of the town’s identity.

By the sixteenth century, Bosnia had become part of the Ottoman Empire, in a matter of decades, Mostar was transformed from a minor river crossing to a thriving imperial crossroads.The Ottomans used monumental architecture to affirm, extend and consolidate their imperial holdings. Bosnia was made a crown land of the Austro-Hungarian Empire New monuments and architectural styles reflected the aspirations of Mostarians and the Austro-Hungarian administration. 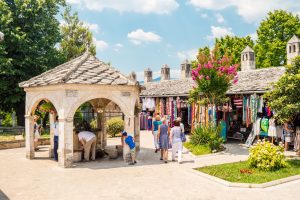 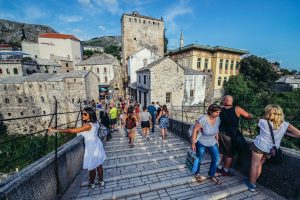 The Old Bazaar is placed in the centre of the city, you can admire one of the oldest parts of Mostar, which winds along a small, pretty, cobbled street, dating back to the middle of the 16th century, where characteristic crafts shops and traditional restaurants are found. 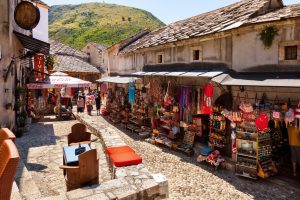 Turkish house or Biscevica corner, is one of the most beautiful preserved residential structures from the Turkish period. House is surrounded by the high walls which protected girls and women from curious men sights in 18th century.

Karadozbey Mosque is a mosque in the region of Herzegovina. It was built by the Turkish architect in 16th century, but in the Second World War it was severely damaged, and in the Bosnian War it was almost completely destroyed. However, the mosque is rebuilt in 2004. and today receive big number of visitors. 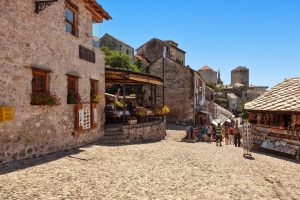 Join us on our Dubrovnik and Montenegro 3 day private tour indluding Mostar.