Sarajevo is the capital and largest city of Bosnia and Herzegovina and as such it is Bosnia and Herzegovina’s administrative, economic, cultural, education and sport center.
It is located in the Sarajevo Field, surrounded by the Olympic mountains: Bjelasnica, Igman, Jahorina and Trebevic. 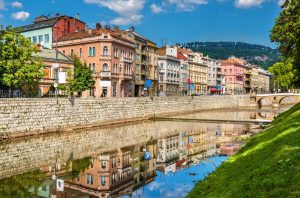 The city is famous for its traditional cultural and religious diversity. It is a place where the Western & Eastern Roman Empire split; where the people of the Roman Catholic west, Eastern Orthodox east and the Ottoman south, met, lived and warred. Due to its long and rich history of religious and cultural variety, Sarajevo was sometimes called the “Jerusalem of Europe”or “Jerusalem of the Balkans”.

Most of the Sarajevo’s tourist attractions are located in the Old Town known as Bascarsija spreading towards the city center, easily reachable on foot and well connected to other parts of the city and to the surrounding mountains and other natural and cultural sites by public transportation. 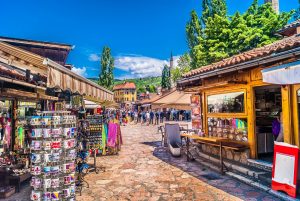 Its interested culture and history is noticed also from the travel guide series.
In December 2009 Lonely Planet listed Sarajevo as one of the top ten cities to visit in 2010.

Sarajevo has attracted international attention several times throughout its history.
In 1885, it was the first city in Europe and the second city in the world to have a full-time electric tram network running through the city, following San Francisco.
In 1914, it was the site of the assassination of the Archduke of Austria that sparked World War I.
Seventy years later, it hosted the 1984 Winter Olympics.

Bosnian cuisine is balanced between Western and Eastern influences. Typical meat dishes include primarily beef and lamb. Some local specialties are ćevapi, burek, dolma, sarma, pilav (pilaf), gulaš (goulash), ajvar and a whole range of Eastern sweets. To finish your meal you should try baklava, a Turkish sweet.

While in Sarajevo be sure to try a shot or two of Bosnian / Turkish coffee prepared and served in the traditional manner.
Just the fact that they named types of coffee according to the occasions shows how important coffee is for their every day life:
Razgalica – is the first morning coffee.
Razgovoruša – is the coffee that Bosnians drink later in the morning and usually with friends and work colleagues.
Sikteruša – is served after a gathering and it is a polite way to tell the guests that it is time to leave.

In Sarajevo, tipping in bars and restaurants is expected.
In smaller restaurants, it’s not customary but is always appreciated. 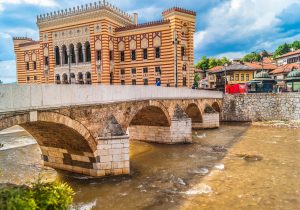 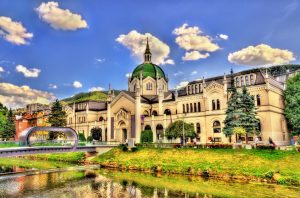