Ston offers an unique environment as a town with the second longest stone wall in Europe (5,5 km), with narrow quiet streets, noble ancient houses and with traces of ancient cultures. History of this Medieval little town reaches back as far as the 14th century. 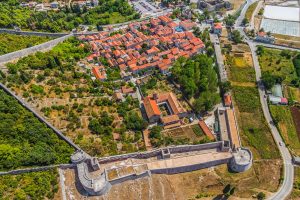 Ston was a major fort of the Ragusan Republic whose defensive walls were regarded as a notable feat of medieval architecture. The town’s inner wall measures 890 meters in length, while the Great Wall outside the town has a circumference of 5 km. The walls extend to Mali Ston (“Little Ston”), a smaller town on the northern side of the Peljesac isthmus and the end of the Bay of Mali Ston, notable for its mariculture.

Its former value as a „salt city“ gets confirmed even today in the plants of the oldest active salt-works in the world. These saltworks have remained faithful to the tradition and to the natural way of salt production which has not changed since remote ages. 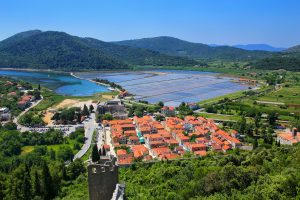 The gulf of Mali Ston with places Mali Ston, Hodilje, Luka, Duba has a clean and natural environment.It has been well-known for its mussel and oysters-growing farm since Roman times, and the oysters from Ston (ostrea edulis), as an acknowledged natural aphrodisiac has made this region world-famous.

The walls of Ston were built in 1333 when Ston became a part of the Republic of Dubrovnik. Their purpose was to defend the Republic and the peninsula. Dubrovnik government in 1335 and amended in 1370 and is considered one of the best planned and best structured cities in Europe. The walls of Ston were a massive architecture and construction feat. Originally 7000-meters long (22 965 ft.), they consist of several parts; the Ston city walls, the Mali Ston city walls and the Big wall with its three forts. Its forts and towers are strengthened by 10 round and 31 square flanking towers and 6 semi-circular bastions.The walls were last used in the 19th century for defense of the city and salt pans, and today they are a priceless monument of immense architectural and cultural value. 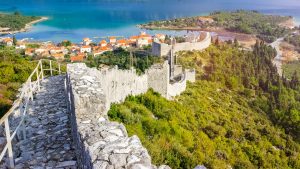